Every Age has its signature follies: from 15th century Europe’s infatuation with the codpiece to the early-20th century radium craze (radium-filled chocolate bars, toothpastes and suppositories were once quite in), historical hindsight eventually makes a fool of every decade, dynasty, century and/or reign. What will “we” be known and mocked for by the super-sophisticates of the 23rd century? It’s always difficult to know as it’s happening  (eg, I’m quite sure I felt that elephant-bells and cork-heeled platforms  were fundamentally sound, at the time), but some trends are so fucking jaw-droppingly moronic that they sort of… stand out. Sticking, for the sake of simplicity, to the Lit World, we find, for example…

Over the last few years, the number of books about nonwhite characters has spiked. In 2016, more than a quarter of young adult and children’s books featured characters of color, compared to just 10 percent in 2013. There’s a catch, though. Most of the authors are white. As a sensitivity reader, Clayton’s job is to help nonblack authors avoid portraying black characters in a way that feels inauthentic or uninformed. She herself relies on sensitivity readers to improve her writing — for her first book, she hired 12 different readers to review aspects of the story that she and her writing partner didn’t base on firsthand experience.

Amazing: this self-appointed representative of (every possible variety of imaginable) Black People does this professionally. Q: if I read one of the books written by one of this racial-scam-artiste’s clients and it offends me, does the client get his or her money back? If not: wouldn’t it be cheaper to know a few Black People instead? (Srsly, White Writers: it’s not that far-fetched a scheme). Who do we blame: the racial-scam-artiste, for capitalizing on a bizarre craze… or the White Writers who A) think they’re obligated to write characters-of-color and/or B) do it for the money and/ or C)  are under the impression they need to check with a Demographic Authority before a creation of their own imagination goes to page? Ooops, but, wait; here’s a picture of the “Sensitivity Reader”: 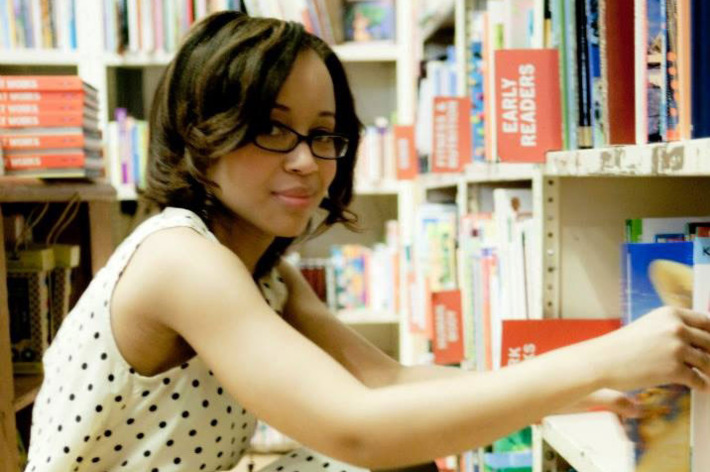 Maybe Ms. Clayton needs to check with some actual dark-skinned People of Color before she signs off on some of these possibly-offensive characters we’re all so terrified of encountering…? Though that would be as silly as everything else relating to Ms. Clayton’s profession (or side-line), wouldn’t it?

But let’s think this through. What kind of Racial Errors are “we” (this is not the Royal We but the Insinuated-Second-Person-Subjective-Patronizing We)  afraid of reading or committing, precisely, in Lit? Are we more afraid of haplessly reading or writing a cringe-inducing Racial Stereotype, such as…

“Rufus was a husky, surly, tooth-pick-sucking hustler of pure ebony with bedroom eyes and a Chicago swagger. When Patti brought him home, over Christmas break, after her first semester at Radcliffe, I knew there’d be fireworks at the dinner table that night in Houston…”

Or do we fear committing the subtler sin of  Racial Condescension? À la…

“Reginald (recently promoted to the head of CERN’s international team of Quantum Mechanics)  sighed heavily as he gazed upon the Mediterranean from the quay at Naxos, his profile dark and chiseled as an Ethiope’s face on a coin from antiquity;  he whispered lines from Homer as he guided the sloop’s nose toward Syros… so far was he from his birthplace in Compton… “

Clearly, the first example seems the less sensitive of the two and the second seems the most preposterous, but the surprising solution to the “problem” nestles in the fact that neither character described is impossible; there are versions of both in existence. Further: only someone ill-acquainted with the imaginative possibilities of reading or writing would take either character to represent a demographic mean or a social prescription. Even if only one “Reginald” or “Rufus” ever existed on Earth, and even if neither have (though both can be found in abundance, I assure you), the characters are as valid as any (whether the Writing itself, is, is another question). If a “White” Writer wants to use a “White” acquaintance as the model for a “Black” character: so fucking what? And so on. Because to argue otherwise falls right into the Essentialist philosophical trap of Nazism, surely.

But. What if we raise the stakes, and describe a “Black” character who would not only appear to be built from Embarrassing Stereotypes, but who engages in a Racially Charged activity: say: Rape? The male character in the following passage (from a published book, kids! A bestseller!) is Black.  The fair-skinned, model-pretty young well-to-do  female character (with a handsome, gentle White feminist husband, btw)  has been kidnapped, and serially raped (by Black males) from the beginning of the (stylistically bodice-ripping) narrative ordeal:

I was desperate to keep his body from touching mine more than necessary. He kissed my shoulder and fondled my breasts affectionately. I pitied him, how carelessly he had been loved, how easily he had been discarded, how little he knew of love or true desire. I loathed myself for my compassion. I loathed him for making me feel anything toward him at all. I shook, silently, my hand over my mouth until my bitterness welled. “With you as his father, your son has a very good chance of turning out exactly like you.”

TiPierre grabbed me by my neck, the V of his thumb and forefinger locked just below my chin. I tried to swat his arm away but he squeezed until my eyes bulged and I gasped hungrily for air. I was on the edge of something, a quiet blackness. I found comfort there.

“You are an animal just like the man you work for,” I said hoarsely, relaxing into his hand, hoping TiPierre would kill me. I longed for him to squeeze just a little harder, to show no mercy. I was no one. My death would not matter. He finally released his grip. I touched my neck, could still feel the pressure of his hand against my fingertips. He kissed my collarbone, and the new bruises blooming around my throat. “I am sorry,” he said, “but what you said was not nice.”

“We are not friends. We are not lovers. I do not choose this. I do not want you. My God, surely you can see that.”

He was seemingly oblivious. TiPierre brought his mouth to my breast and began to suckle softly. I panicked, shoved him away, but he refused to stop, refused to hold any part of me as sacred. The ache began to lessen as he stole the milk from my body. The relief was so startling I could not bear it. I dug my fingernails into his shoulders and scratched so hard, I hoped I might find bone. He cursed and pulled away. I covered my chest with my arms, shaking again.

“You cannot do that. You cannot.”

For once, TiPierre heard me. He shrugged, resumed talking about his son, and I let myself breathe. The son’s name was Innocent Sylvain; he was nine months old. “I’ll bring you a picture of my boy,” he said.

I grunted. I did not want to see any evidence of the man in this animal.

Makes us a little nervous, doesn’t it? The Black rapist is described by the narrator as an “animal”, as she describes the other  brutal, ignorant Black male rapists in the book; he violates her young motherhood by sucking milk from her pale breasts with his Black mouth while raping her! It feels a bit Racist, no?  Perhaps more than just a bit? Perhaps a Sensitivity Reader should have been consulted…?

No problem: a Black woman wrote that stuff (soon to be a major motion picture)… a Black woman who has recently revealed that she was gang-raped, at the age of 12… by Whites.

So we suppose it can’t be Racist at all.

THE MOST RECENT POSTS

BIZARRE STUFF FROM ANOTHER BLOG: The Ept, The Ane and the Fantile

MY FOURTH or FIFTH BOOK

The Early Days of Television

If I Dealt in Candles: The Lost Masterpiece of Ralph Ellison

what you don’t know

The Author with His So-So Paintings in the ’80s

OXEN of the SUN

the author in high school, looming behind two other figures from this recollection

portrait of sonja, 4’x5′, acrylic on canvas. the humanoid figure in the upper left, with the sphere for a head, is my reading a poem to sonja. sonja’s face is red, her left arm is raised, her boobs are huge and their actual size

See? I’m not one of those guys who braggingly exaggerates the beauty of the women he nearly slept with

painting i did to allegorize the situation with “aria tanner”: The Excellent Taste of Our Benefactors: 4′ x 5′, acrylic on canvas, a black-faced, red-haired angel is breastfeeding a kneeling woman (my ex, in fact) in a garden, during an eclipse

ONE of my paintings, of one of My Lovers (acrylic on canvas, c, 3’x 2′) from when I was a Cheater